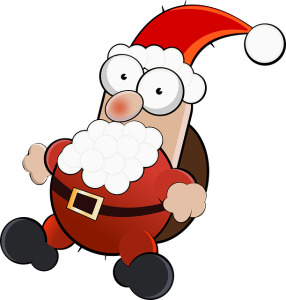 What can engineering prove about Santa?  Well, for one, Santa would be violating all sorts of building codes.  It’s true.  Look at roof loads, for example.

If Santa is carrying toys for 1.9 billion kids, and let’s assume, say, an average of only one pound of toys (or coal) per kid, then the sleigh is holding roughly 1.9 billion pounds of toys/combustibles (no higher math needed to figure that one out) – enough to collapse pretty much any roof!

But what about his reindeer, you ask? According to the repository of all “truth”, a.k.a. Wikipedia, reindeer (or Rangifer tarandus – the caribou) weigh between 330 and 550 pounds.  Now, I’m an engineer, so for the sake of public safety I have to assume that Santa’s reindeer are going to be about as well fed as he is, and lean more towards the 550 pound side.

And reindeer can apparently reach 3 ft-3 inches wide and 7 ft long.  (Stay with me here while I geek out for a second…this is why we engineers get paid the “big bucks”…cough.)  So 3.25’ x 7’ is almost 23 square feet of roof area covered by one animal.  So the 550 pounds spread out over 23 square feet would be about 24 pounds per square foot.  But, you say, the building code only requires a typical residential roof to be designed for 20 pounds per square foot.  So the reindeer would be overloading the roof!  Yikes!

And what about Santa himself?  The building code requires all roofs “subject to maintenance workers” (let’s assume Santa qualifies as a maintenance worker) to be designed to support a 300 pound “concentrated load” at any location.  Now, I don’t know how much the big guy weighs, but if we assume he starts the night out at a slim 200 pounds, by the end of the night he will have eaten about 25,000 tons(!) of cookies – that’s an average of two 0.4 oz cookies (single-stuffed Oreos, mind you, not double-stuffed) per household x 1 billion households (assuming the typical 1.9 children per household), so he will definitely be over the 300 pound limit by the end of his shift! So he, too, would be overloading the roofs!

Now, I know he’s supposedly been doing this for hundreds of years.  But obviously his sleigh, reindeer, and cookie-toting-self are WAY too much for the average roof to support.  Yet I’ve never heard of a single Santa-induced roof collapse. So, as an engineer I have to look at this logically, and use facts to draw my conclusions.  Therefore, to me it’s pretty clear – the truth is, he must be using magic!